The UK’s leading pet supplier, Postman Pooch, looked into how a movies that became box office successes influenced the popularity of certain dog breeds among pet lovers. Findings revealed that Labradors and German Shepherds are the most sought-after dog breeds that have appeared in Hollywood films.
A record number of Labradors were purchased following Yellow’s silver screen debut performance in the hit film Far from Home (1995), which saw over 130,000 labs being purchased in the two-year period.
Meanwhile, 100,000 German Shepherds were purchased after viewers saw Buck in The Call of the Wild.
Taking third places as the most sought after dog breed following a starring role is Cocker Spaniels, following the release of Disney’s classic Lady and the Tramp.
Lady’s leading performance saw sales of the breed jump by a further 35,000 following the film’s release back in 1955.


We use your sign-up to provide content in ways you’ve consented to and to improve our understanding of you. This may include adverts from us and 3rd parties based on our understanding. You can unsubscribe at any time. More info
Postman Pooch also looked into the archives of the most famous dogs to feature in family-friendly movies and their total box office grosses.
This revealed that Disney films, Lady and the Tramp, 101 Dalmatians and musical fanatsy hit The Wizard of Oz were the highest-earning movies featuring performing pups.
Lady and the Tramp taking the top spot after having made an impressive $1.9 billion (£1,376,671,307.87) since its release date back in 1955.
101 Dalmatians, which was released in 60 years ago this year, has generated $1.2 billion (£868,284,913.39), while The Wizard of Oz which opened in cinemas in 1939, has made half a billion dollars (£419,992,528.92).
Other famous four-legged friend stars who became a hit among dog lovers and film fanatics included more recent film releases such as Tin Tin, Scooby-Doo and Marley and Me.
Scooby-Doo, who has been entertaining families by with the long running TV series since 1969, got to solve a mystery on the silver screen in 2002 making an impressive $84 million (£60,721,500) in the first weekend of its release.Join our brand new website TeamDogs now.

When you get there, make sharing a picture of your dog in our Top Dogs feed your very brilliant first job.

READ MORE: You will have a little longer for new films to release on Disney+Co-founder of Postman Pooch, Kyle Lovett-Blackwell, has shared his top tips for when it comes to enjoying these dog-featuring films with your own pooch at home:
He said: “Dogs can make for great movie buddies, but choosing a film that includes other dogs or eye-catching animals can come with its challenges.
“Pet owners should be sure to discourage dog barking or jumping at the TV when something peaks their interest from a young age in order to avoid accidents or broken TV sets.
“The best way to ensure that your dog is calm and relaxed when settling down to watch a dog film is to give them long-lasting treats, toys and enrichment games.
“Kong’s fantastic range of products filled with peanut butter or frozen wet food are also sure to keep them entertained throughout the film”.

Keep up to date with all our TeamDogs news by following our social pages. As well as videos, tips and advice, we’ll also be sharing some of your amazing doggy pictures so follow us on Facebook, Instagram and Twitter. 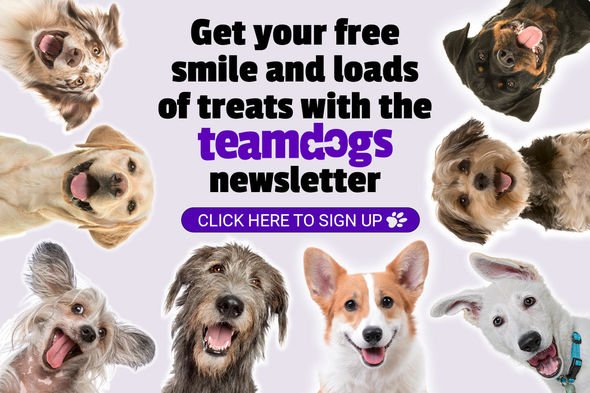 Rare albino Dachshund who has to wear sun cream becomes Insta star [REPORT]
Watch this Dachshund in wheelchair racing across ice hockey [VIDEO]
James Bond: Will No Time To Die release date be delayed again to 2022? [REVEAL]
See today’s front and back pages, download the newspaper, order back issues and use the historic Daily Express newspaper archive.