Delhi News highlights: Delhi on Wednesday reported 1,317 fresh Covid-19 cases and 13 deaths, health bulletin said. While 62,556 samples were tested, today’s positivity rate stood at 2.11 per cent.
Meanwhile, amid protests by students, DU Proctor Rajni Abbi Wednesday announced the university will reopen on February 17.  By this evening, a notification will be issued from the side of the vice-chancellor, Abbi said, addressing protesting ABVP activists. Nine ABVP activists had launched a hunger strike at Delhi University’s North Campus demanding the reopening of colleges. Left activists were also protesting for the same in the campus on Wednesday.
Delhi University’s Academic Council (AC) is meeting Wednesday to discuss its draft undergraduate curriculum framework (UGCF). Though UGCF is the only item that has been placed formally on the agenda, the reopening of the university was also likely to be discussed. In the afternoon, the proctor, registrar and Dean Students’ Welfare came out to appeal to the ABVP activists to end their hunger strike and made the reopening announcement. 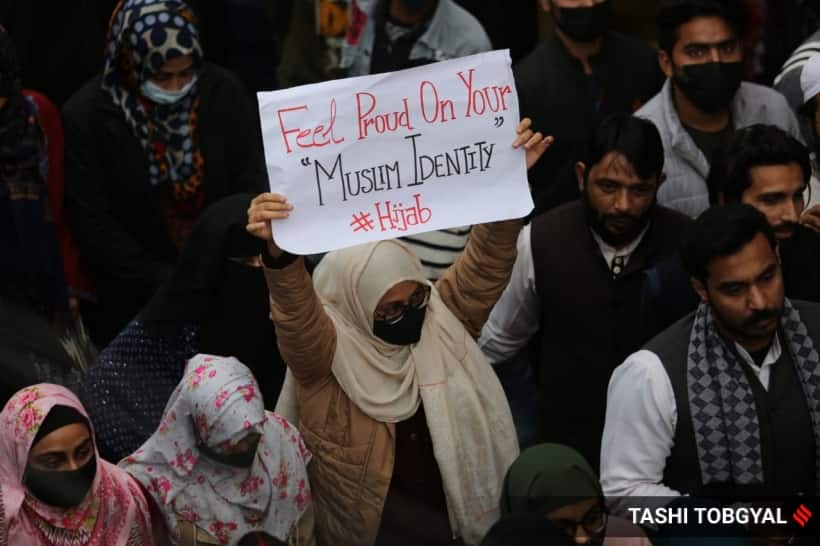 People take part in a protest against the Hijab ban in schools, at the Shaheen Bagh in New Delhi on Wednesday. The protest was organised by the political outfit AIMIM’s Delhi chapter. Student members of KYS protest for reopening of Universities outside Shastri Bhavan in New Delhi on Wednesday. 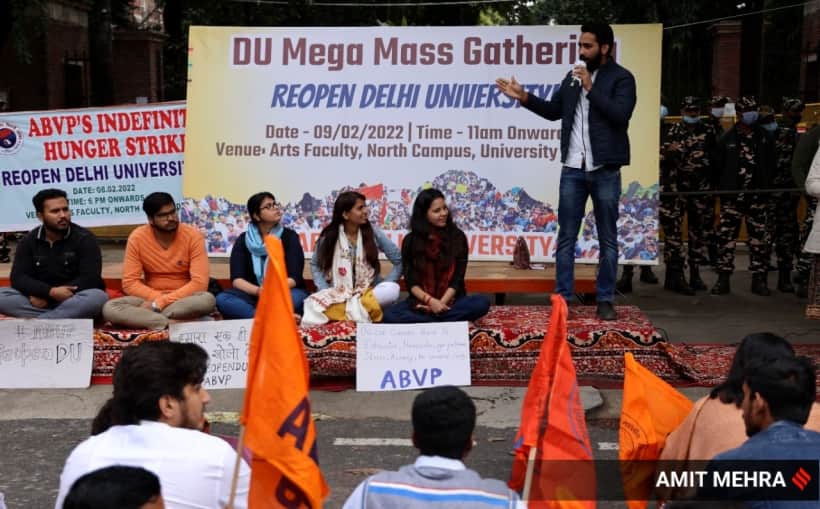 Students protest against the DU administration demanding the reopening of the campus at North Campus of the university, Wednesday, Feb. 9, 2022.
Delhi on Wednesday reported 1,317 fresh Covid-19 cases and 13 deaths, health bulletin said. While 62,556 samples were tested, today’s positivity rate stood at 2.11 per cent.
CBSE second term theory exams will begin on April 26. The exam will be conducted offline mode in centres to be allotted to students.
Akash Dhima, a student of Bachelor in journalism programme from Delhi School of Journalism, North campus says it doesn’t matter much since they have just two months left in the college. He said reopening would be good for other batches.
About his studies during the pandemic, he said, “the studies have suffered especially the practical aspect has been affected. These are costly software that is taught in labs which we do not have at home. And you need interaction to learn these things. Many of my friends are from an underprivileged background and do not have a laptop so their learning process has been affected. It’s all theory presently. Earlier there used to be seminars, we used to go to news shows and develop contacts.” 20-year-old Adhiraj Hazarika says that colleges should be opened following all precautions and COVID protocol. He is a third-year Bcom student.
“The studies have been managed but how much I have been able to learn is a question. It is very little in comparison to how much I would have if I had gone to college. The interaction is less which affects the learning methods since online education is a new concept the current approach is to just get it done,” he said. An official notification regarding reopening issued by DU states that offline classes for all UG and PG courses will begin from February 17. Outstation students are advised to reach Delhi such that they can complete three days of isolation before reporting to their departments/colleges.
‘There is no participation in online classes, the assignments are mostly theoretical, and the open book exams feel futile. I feel like if I graduate like this, I will be incompetent,’ said 19-year-old Saniya Raahath, a second-year Journalism (Hons) student from Delhi College of Arts and Commerce. She has completed almost four semesters from her home in Kollam, Kerala. A nodal officer was requested to pursue the matter with government agencies, however, the response from the Delhi government is still awaited. (File Photo)
Frequent transfer of Delhi Police nodal officers, leave taken by a Sub-Divisional Magistrate for her marriage and disruption due to the pandemic are some of the reasons cited by a monitoring committee set up by the National Green Tribunal (NGT) for not submitting its report on enforcement of noise pollution measures.
The letter citing the delay in submitting the report, written by Justice S P Garg, a former Delhi High Court judge, was reproduced in an order passed by Justices Adarsh Kumar Goel, Sudhir Agarwal and expert members, Dr Nagin Nanda and Afroz Ahmad. The NGT has given the committee time till April 30, 2022, to complete its work and file the report. The application was filed on behalf of an organisation, Akhand Bharat Morcha, before the NGT for deliberation on the failure of the statutory authorities in Delhi in controlling noise pollution in the capital.
Away from the politics over the first pandemic-induced migrant exodus, Mohammad remembers one thing distinctly – the desire to return home. A day after the Prime Minister said the Delhi government had encouraged migrants to head back to their states, and Chief Minister Arvind Kejriwal hit back saying this was untrue, Mohammad said all he knows is that weeks after the announcement of the lockdown in March 2020, news had spread of buses being made available at Delhi’s Badarpur to head to Lakhimpur Kheri in Uttar Pradesh.
“I went there along with several people from the area, and got on a bus. I reached my village in Ramgarh by bus, auto, rickshaws – whatever we got, ” he said.
Most of the workers The Indian Express spoke to in areas such as Seelampur, Kanti Nagar and Khari Baoli, where labourers work and reside in large numbers, said key reasons for leaving at the time include work coming to a stop, shortage of ration, fear of being infected with an unknown disease and missing their families during a crisis. None of them said they were encouraged by the Delhi government to leave.