Bihar Political Crisis Updates: In fast-moving political developments in Bihar, Nitish Kumar on Tuesday resigned as Chief Minister of Bihar and submitted a support letter from seven parties and one Independent to Governor Phagu Chauhan and staked claim to form a new government in the state. JD(U) leader Nitish Kumar has split with ally BJP for the second time in eight years and said, “All MPs and MLAs are at a consensus Read More
Key Events
The ruling DMK said its president MK Stalin’s vision to fight the BJP at the national level has gained momentum with Nitish Kumar’s JD(U) pulling out of the NDA in Bihar. To take on the saffron party at the Centre, DMK organisation secretary RS Bharathi said that his party president Stalin, also Tamil Nadu Chief Minister, had batted for opposition parties to join hands, well ahead of the Presidential election held last month. This vision of his party chief to fight the BJP nationally, has now gained momentum and it would pick up more traction ahead of the 2024 Lok Sabha election, Bharathi told PTI. Nitish Kumar today resigned as NDA Chief Minister to stake claim to form a new government after being unanimously declared the leader of the opposition grand alliance. Apparently, the DMK leader indicated that such mobilization of anti-BJP forces would eventually dislodge the Saffron party from the seat of power at the Centre in 2024 Lok Sabha election.
The RJD took to Twitter and announced that the Chief Minister and Deputy Chief Minister of JD(U)-RJD led ‘Mahagathbandhan’ in Bihar will take oath at Raj Bhawan at 2pm Wednesday.
माननीय मुख्यमंत्री जी और उपमुख्यमंत्री जी का कल अपराहन 2 बजे राजभवन में शपथ ग्रहण समारोह होगा।
— Rashtriya Janata Dal (@RJDforIndia) August 9, 2022

JD(U)-RJD led ‘Mahagathbandhan’ (grand alliance) in Bihar will take oath at 2 pm on Wednesday.
The BJP has called a crucial meeting of all Bihar MPs, MLAs and MLCs in the party office on Wednesday at around 10 am.
Bihar Chief Minister Nitish Kumar on Tuesday submitted his resignation to Governor Faghu Chauhan hours after he announced the JD(U)’s alliance with the BJP has ended. In his first statement following his meeting with Governor Chauhan, Kumar said the decision to sever ties with NDA was taken by JD(U). “All MPs and MLAs are at a consensus that we should leave the NDA,” he said. Read More
JD(S) president HD Devegowda has reacted on current political situation in Bihar.
I have been watching the developments in Bihar. It made me think of the days when the Janata Dal parivar was under one roof. It is gave three PMs. I am in my advanced years, but if the younger generation decides it can offer a good alternative to this great nation.
— H D Devegowda (@H_D_Devegowda) August 9, 2022

Bihar chief minister Nitish Kumar has resigned, announcing the end of his party JD(U)’s alliance with the BJP. The current phase of the coalition lasted for five years, from July 2017 to August 2022. The Janata Dal (United) and Bharatiya Janata Party began their political journey together in the 1990s with JD(U) getting the “big brother” status in Bihar, something that also reflected in portfolios given in the National Democratic Alliance (NDA) government at the Centre. The number of assembly seats for both BJP and JD(U) since 2005 depicted it. The alliance got its first successful five-year term in 2005 and Nitish has been the state’s chief minister since then. JD(U) was the natural claimant of the CM post as it was consistently winning more seats than its alliance partner BJP in the assembly elections. Read More
When asked about possibility of Nitish Kumar as PM candidate in the 2024 Lok Sabha elections, RJD leader Tejashwi Yadav said, “I am leaving this for Nitish ji to answer. He is the most experienced CM and he always put forward the national agenda.”
RJD leader Tejashwi Yadav, who also went to Raj Bhawan along with JD(U) leader Nitish Kumar to meet Governor to stake claim to form a new government in Bihar, said, “What did the government do when China encroached over our land? Message sent to all the Opposition parties that those who stand strongly with the people, people accept them. I want to thank Nitish Kumar for showing the will to take a decision. Nitish ji took the decision in the interest of the state and country. Everybody wants to stop BJP’s rath in the state. We are chacha bhatija. Nobody can take away our ancestral right.”
After meeting the Governor, JD(U) leader Nitish Kumar told the media, “We have support of seven parties and one Independent. The letter of support signed by all of them was given to Governor Phagu Chauhan. The Governor to decide when can we form the government. Everyone in the party was of the opinion to leave NDA.”
BJP leader Ravi Shankar Prasad said, “2020 elections were won under PM Narendra Modi’s leadership. Bihar’s mandate was insulted today. Is corruption not an issue now? Why mandate of Bihar is being insulted time and again. If BJP was troubling him (Nitish Kumar) for the past two years, then why he did not speak at that time.”
After splitting with ally BJP for a second time in eight years, Nitish Kumar on Tuesday resigned as the Chief Minister of Bihar and is set to return to power with the help of Congress, Rashtriya Janata Dal (RJD) and Left parties which have already declared open support for the Janata Dal (U). Kumar submitted his resignation to Bihar Governor Phagu Chauhan at Raj Bhawan in Patna. “All MPs and MLAs are at a consensus that we should leave the NDA,” he said after submitting his resignation to the Bihar Governor. The JD(U) leader submitted a support letter of 160 MLAs to the Governor. Read More
Bihar BJP core group will hold a meeting at 6 pm today. All leaders arrive from Delhi.
JD(U)’s Nitish Kumar and RJD leader Tejashwi Yadav today met Governor Phagu Chauhan and staked claim to form a new government in Bihar. Kumar has resigned as Chief Minister of the NDA government in the state and said the decision to sever ties with the NDA was taken by his party.
Dumped yet again by Nitish Kumar in Bihar, the BJP is readying its arsenal against the new alliance of JD(U), RJD and Congress again joining forces, and will attack the new government on the issue of corruption, law and order and abuse of the public mandate in the 2020 state elections. Bihar BJP chief Sanjay Jaiswal in a brief statement said Nitish Kumar had “betrayed Bihar people and the BJP” as the 2020 polls were fought together under the NDA and the mandate was for the JD-U and BJP. “We won more seats despite that, Nitish Kumar was made the CM,” Jaiswal said. Read More
Addressing a presser after Nitish Kumar announced to walk out of NDA, BJP said, “We fought the 2020 polls together under NDA, the mandate was for JD-U and BJP. We won more seats despite that Nitish Kumar was made the Chief Minister. Whatever happened today is a betrayal of Bihar’s people and the BJP. Bihar BJP chief Sanjay Jaiswal, who was present in the press conference, said people of the state will not tolerate it.
According to sources, JD(U)’s Nitish Kumar has been chosen as the leader of Mahagathbandhan (grand alliance). (Image: special arrangement) 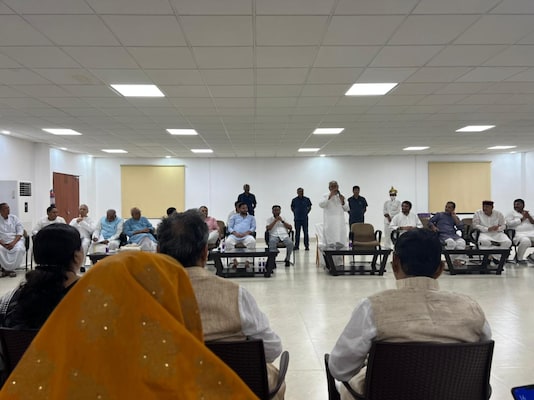 According to RJD sources, JD(U) leader Nitish Kumar told Tejashwi Yadav to forget what happened in 2017 and start a new chapter.
Hindustani Awam Morcha (HAM) president Jitan Ram Manjhi has extended support to JD(U) chief Nitish Kumar, who has walked out of NDA alliance and resigned as Bihar Chief Minister.
Opposition parties led by Rashtriya Janta Dal is all set to hand over the letter of support to Bihar Chief Minister Nitish Kumar to form the government, putting an end to the NDA government in Bihar. Nitish Kumar has handed over his resignation to the Governor at 4 pm along with a letter of support from 160 MLAs. Sources said that the alliance between JD(U) and BJP is over as Nitish Kumar briefed party MLAs the reason behind splitting from the alliance in the meeting held earlier on Tuesday. Read More
Before any official announcement, RJD leader Upendra Kushwaha in a tweet congratulated Nitish Kumar for leading a “new coalition in a new form,” embracing the RJD-led ‘Mahagathbandhan’ (grand alliance) to continue in office. “Congratulations to Nitish Kumar ji for assuming leadership of a new coalition, in a new form”, tweeted Kushwaha referring to the opposition grand alliance’s support for the JD(U) leader. “March ahead Nitish ji. The country is waiting for you”, Kushwaha added.
A meeting of the RJD-led grand alliance, comprising the Left and the Congress, also took place at Rabri Devi’s residence, across the street from Nitish Kumar’s residence where all the MLAs were said to have signed a letter of support to him. Leader of the Opposition Tejashwi Yadav was expected to visit the CM’s residence to hand over the letter of support any time. Sources said that Tejashwi Yadav has demanded State Home Ministry and Speaker’s position for his party.
The JD(U) today hailed Nitish Kumar, its de facto leader, for assuming the “leadership of a new coalition”, while the Left iterated its support for him in a coalition sans BJP.
JD(U) sources also told CNN-News18 that Union Home Minister Amit Shah dialled Nitish Kumar in the morning, but sources in Shah’s office denied it.
Amid reports of fissures between the two allies, the Bihar opposition — Congress, RJD and Left — have declared open support to Nitish Kumar and JD(U).
The RJD, which was in an alliance with JD(U) earlier, said that it was ready to embrace Nitish Kumar and his party if he snapped ties with the BJP. Nitish had in 2017 pulled out of an alliance with RJD over corruption charges levelled against then deputy chief minister Tejashwi Yadav.
Meanwhile, the RJD has dissolved its media panel and advised all senior functionaries to refrain from making any statement. Sources say that if the RJD and JD(U) sort out who should get the complex issues of who becomes the chief minister and who controls the home department, then the JD(U) will induct RJD ministers without the need to sworn-in fresh chief minister.
The Congress today said it will support any non-BJP government in Bihar to help strengthen secular forces. Sources said the Congress, which has 19 legislators in the Bihar assembly, will go by what the RJD decides and its presence will help strengthen the coalition.
They added that like in Maharashtra where the Congress helped stitch together the Maha Vikas Aghadi (MVA) government by supporting the Shiv Sena which was ideologically different from it, it could align with Kumar who has remained with them in the past.
“Ours is an ideological battle and we are not fighting for power. The Congress will support any non-BJP government and help strengthen secular forces,” Congress general secretary Tariq Anwar told news agency PTI. “Because Nitish Kumar is leaving the BJP and coming over, we will support him,” he said, adding whatever steps are needed to strengthen secular forces and defeat the communal forces the grand old party will take.
AICC in-charge Bhakt Charan Das, who is on a scheduled visit, expressed similar sentiments prior to the legislature party meeting but said “no idea” when asked about reports that Nitish Kumar has spoken over phone to Sonia Gandhi and sought an appointment on August 11.
Allies since the 1990s, JD(U) and BJP have in the recent past squabbled on issues ranging from Agnipath, caste census, population law and ban on loudspeakers.
(with inputs from PTI)
Read the Latest News and Breaking News here
TAGS
Follow us on
Download News18 App