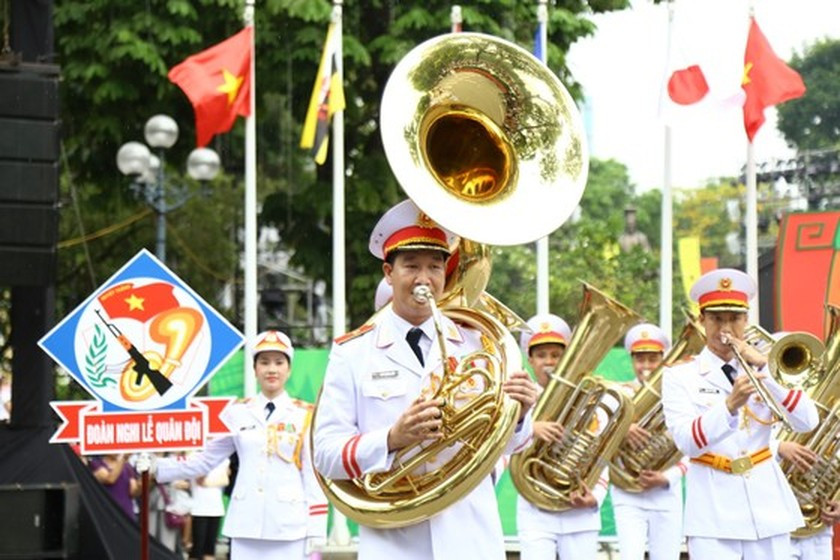 The ASEAN Plus 2022 Police Music Festival was held by the Ministry of Public Security at Hoan Kiem Lake area in the capital city of Hanoi this morning.
The Ministry of Public Security of Vietnam desired that the festival will be an opportunity to introduce the image of the friendly country and hospitable people of Vietnam to international friends, and contribute to strengthening the cooperation relationship between the Vietnamese police and the police of other countries and affirming that Vietnam, the capital city of Hanoi and the Vietnamese police are ready to be reliable partners and responsible members of the international community.
Additionally, the music event aims at improving culture, art and mutual understanding of national cultural identity, country, people and the development process of the police force of Vietnam and other countries.
The ASEAN Plus 2022 Police Music Festival lured eight music troupes with over 400 musicians and dancers. Of these, there were six music bands from police forces of Brunei, China, Japan, Laos, Myanmar and the Philippines and two music bands from the host country of Vietnam.
In the program framework, nearly 100 musicians and dancers of Vietnam’s police force performed songs bringing the message of the Ministry of Public Security of Vietnam on the traditional solidarity, cooperation and friendship between the police forces of countries in the fight against transnational crimes towards peace and the benefit of the people of each country.
Exhibition featuring Austrian composer opens in Hanoi
The Austrian Embassy in Hanoi, in cooperation with the National Library of Vietnam, the Vietnam National Symphony Orchestra (VNSO) and the Arnold Schönberg Centre, is organising an exhibition on Arnold Schönberg and the New Viennese School.
The exhibition showcasing photos of the life and career of the composer will be available at the National Library of Vietnam from July 8-22.
Arnold Schönberg (1874-1951), who also developed the twelve-tone technique, and his students, particularly Alban Berg and Anton Webern, are among the most influential composers of the 20th century. They marked a new epoch in music history.
The exhibition will be accompanied by performances of the works of the mentioned composers by musicians from the VNSO, the Vietnam Academy of Music and Schubert in a Mug under the musical supervision of the Principal Conductor of the VNSO Maestro Honna Tetsuji.
It opened at 4pm on July 8 in the library.
It will be followed by a concert with arrangements of Viennese Waltzes by Arnold Schönberg, Alban Berg and Anton Webern.
Other performances with works of these composers will take place on July 16 and 22 at 6.30pm at the same venue.
This exhibition is part of celebrations of the 50th anniversary of diplomatic relations between Vietnam and Austria.
Politburo, Secretariat of Party Central Committee look into major national matters
The Politburo and the Secretariat of the Party Central Committee convened a meeting in Hanoi on July 8 to look into major national matters, the international situation in the second quarter and the first half of this year, as well as key tasks in the coming time.
The event was chaired by Party General Secretary Nguyen Phu Trong.
A report delivered at the meeting showed that during the reviewed period, thanks to efforts by the entire Party, people and army, the country has reaped achievements across all spheres, from socio-economic development and COVID-19 prevention and control to national defence, security, external relations, Party building and rectification, and the fight against corruption and other negative phenomena.
The gross domestic product (GDP) grew well, inflation was brought under control, major economic balances were ensured, and the domestic monetary market remained stable, according to the report.
Noted results were also seen in budget collection, trade-services, the number of international tourists, foreign direct investment (FDI), the number of new enterprises, and the labour market.