Malaria and health commune worker Ly Thi Nhieu had just delivered a baby in the early morning hours before she joined the Hanoi-based team from the National Institute of Malariology, Parasitology and Entomology (NIMPE) for a malaria supervision trip in Pa U commune in Viet Nam’s north-western Lai Chau Province. The trip involved taking blood samples from the villagers to detect malaria. As the acting director of the Pa U commune health centre, staying on call 24-7 has become a daily reality for Ly. The 36-year-old health commune worker has been working and living on-site for over 10 years, providing care for residents of the mountainous province bordering China.

Ly took on the new role as a health commune malaria worker in January 2021. She juggles these tasks on top of her existing duties which include managing the health centre, midwifery, and spearheading public health programmes on methadone therapy, HIV prevention and reproductive health. As a malaria worker, Ly has been supporting the NIMPE with arranging malaria testing sites. She also makes monthly visits to malaria villages herself to conduct periodic tests. Since it takes at least 3 hours by motorbike to reach the villages, each trip is often combined with other tasks such as routine immunizations for children and expectant mothers.

Health worker Ly Thi Nhieu at her health station in Pa U, Lai Chau Province, Viet Nam  © WHO/L. Pham
Today, the destination of Ly and the NIMPE’s malaria supervision trip was the isolated Xa Ho village. Xa Ho is accessible by a single dirt road characterized by tight turns and flooded paths. Located in one of the most isolated regions in Viet Nam, it has been largely untouched by the COVID-19 pandemic. The NIMPE has been making regular visits to Xa Ho where malaria is affecting the local La Hu hill tribe. Their slash-and-burn agricultural practices, coupled with substandard living conditions and low literacy rates have made them particularly vulnerable to malaria outbreaks.

Women and children are at the highest risk of contracting malaria globally. However, in the Greater Mekong subregion men constitute the highest proportion of malaria cases. Men are more likely to contract the disease because they often work in high-risk areas such as forests, mines or plantations where malaria is still prevalent. In 2021, men made up 78% of all malaria cases in Viet Nam. Women’s active involvement in malaria programmes enhances the design and implementation of interventions such as community engagement, prevention, vector control and treatment.
Observations from the Greater Mekong subregion show that targeting women during community engagement activities supports compliance in malaria treatment, vector control and prevention. This may be linked to the fact that women are often the primary caretakers of malaria patients in their households. 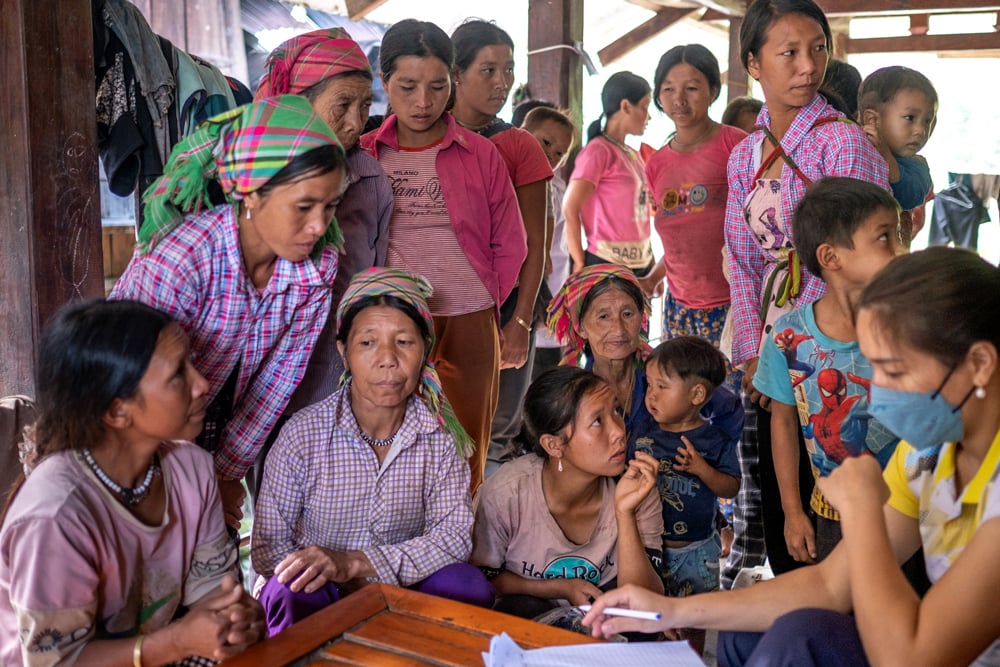 Health worker Ly Thi Nhieu collects data from villagers undergoing malaria rapid diagnostic tests  © WHO/L. Pham
Accompanying Ly is Vu Thi Anh Tuyet, a Senior Technician from the Epidemiology Department of the NIMPE based in Hanoi. Following in her father’s footsteps, Vu started working at the NIMPE after graduating from Dang Van Ngu medical college. The college is aptly named after the medical doctor who made a substantial contribution to malaria control during the Viet Nam war. After 2 decades of screening malaria infections in Viet Nam’s hard-to-reach endemic areas, Vu believes the key to malaria elimination is raising public awareness. She recalls visiting some forested villages during the early 2010s when half the population was infected with malaria. Compared to that period, she has observed how concerted efforts to control and eliminate the parasite have led to a remarkable reduction in malaria across the country. From 2018 to 2021, malaria cases reduced by 90% .

Although Vu spends most her days scrutinizing microscopic slides in her laboratory she also regularly travels with the NIMPE’s supervision teams to find malaria cases in remote villages like Xa Ho. As a Senior Technician, Vu recognizes how important microscopic analysis is for detecting malaria. In places like Xa Ho with a high prevalence of asymptomatic cases, rapid diagnostic tests can fail to identify malaria. “If no parasites were found on the field, we have to examine the slides within the shortest possible time when returning to the lab [in Hanoi]. If there is any parasite, the local team must then be informed so they can take timely action measures,” says Vu. These actions prevent parasite reservoirs and relapses.

Vu Thi Anh Tuyet, a Senior Technician in her laboratory in Viet Nam  © WHO/L. Pham
Despite ongoing challenges which include the high occurrence of asymptomatic infections, the long distances patients need to travel to health centres, and a failure to adhere to treatment, Vu is cautiously hopeful about a future without malaria. She remarks that communities relying on forests for their livelihood will be the first to benefit from malaria elimination as it will improve their quality of life and productivity. “The most effective indicator of improvement is people’s awareness,” says Vu without hesitation. Thanks to communication efforts in the local language, Vu notes that knowledge of malaria prevention among the La Hu hill tribe has improved. For example, now there is at least one bed net in almost every household. Vu links these successes to the efforts of Ly and commune health center staff; without their coordination and perseverance, malaria interventions in the far-flung corners of Viet Nam could not have taken place: “They serve at the frontline of endemic areas and are the driving force behind the radical cure for all patients.”


In Viet Nam, WHO has been working with the National Institute of Malariology, Parasitology and Entomology (NIMPE) and partners to support the country’s malaria elimination efforts. WHO’s malaria work in Viet Nam and WHO’s Mekong Malaria Elimination programme are made possible with contributions from the Global Fund to Fight AIDS, Tuberculosis and Malaria, the U.S. President’s Malaria Initiative, and the Bill & Melinda Gates Foundation. The interviews were collated by Ha Dao and Linh Pham.